By the time you read this, spring will be upon us in full force. In most places, the snow will be gone, the grass will be green, and many of us will be anxiously planning our first camping trips of the season. Over the last year or so, we’ve had the chance to evaluate a couple of different camping products but, of those, we got the most intimate with a pair of items from Klymit. These are specifically designed for you and your significant other to enjoy the great outdoors as a couple — or at least you and a really close friend. The KSB Double is a purpose-built two-person sleeping bag designed for three-season use. For testing, we paired the KSB with Klymit’s Double-V sleeping pad. For as much time as we spend talking about things like knives, water purifiers, and weatherproof fire-starters, maybe talking about why we’d review a product like this is a reasonable concern to address.

As I’ve said before, and will likely say again (for those who didn’t pick up the last issue), prepping is a family affair. If you have a spouse, and you do talk about prepping, this isn’t how the conversation goes: “OK, honey, if anything terrible ever happens here, we’ll each grab our respective go-bags and take off and use our skills to survive the aftermath and link up with each other when society rebuilds.”

If there’s kids involved, this is probably also not how the conversation goes: “OK, honey, if anything terrible ever happens here, I’m going to grab my camping pack and head up in to the mountains. You stay here with the kids and the emergency rations, and I’ll be back for you once I’ve built adequate shelter for all of us.”

The point being, you and your significant other are going to make plans to survive as a team. If that plan involves some kind of fallback or overland movement, you’ll want gear optimized for doing it as a couple. One of the benefits of the KSB is that it packs down smaller than two single sleeping bags. For a couple on the move or a family with multiple children, a double sleeping bag can save space, weight, and money.

The other reason is that not every outing into the woods needs to be about conquering nature or evading hordes of leather-clad raiders. Sometimes we venture into nature to spend quality time with our loved ones and maybe practice a couple skills or work on our physical endurance in a relaxed, pressure-free setting. So, why wouldn’t you want to curl up with your partner-in-crime at the end of a long hike or after an evening of failed attempts at traditional fire-starting? 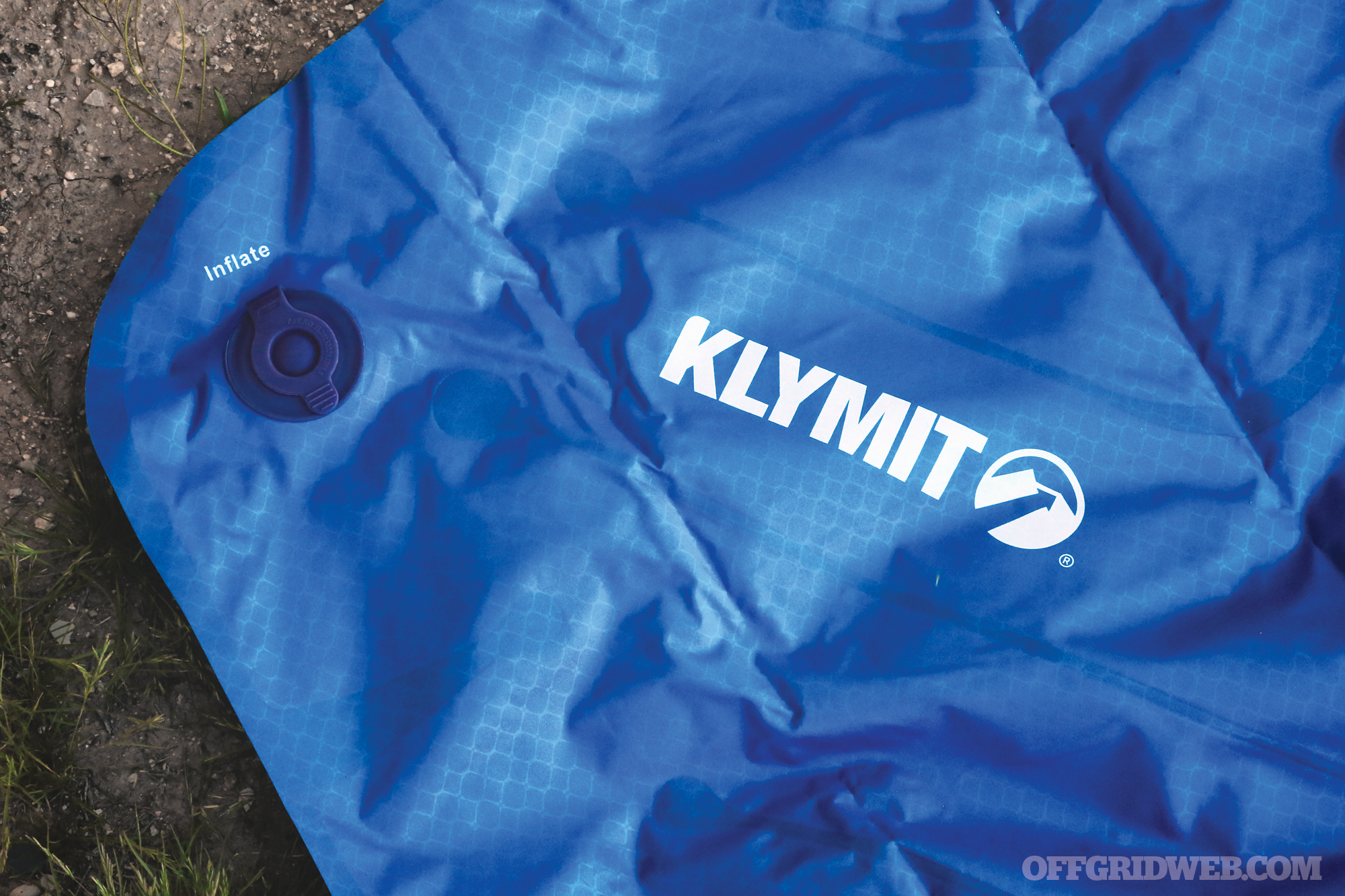 The KSB is a two-part bag. The top layer is stuffed with 650-fill power down (80/20 grey duck), and the bottom uses fully synthetic fill. According to Klymit, this combination optimizes the KSB’s warmth-to-weight ratio.

Everything about the bag is built from the ground up for paired sleeping. There are individual draft covers to allow each person to control the temperature on their side. It’s like dual climate control without having to buy a luxury sedan. To the same end, the built-in hood has a center snap that cuts draft between the two sides and also creates two separate compartments “in case you prefer a personal hood,” according to the website. We think it probably doubles as a fail-safe in case you and your spouse get into an argument before bed.

The bag is somewhat modular, as the top half can be completely unzipped and used as a standalone down comforter if desired. The bottom of the KSB includes a sleeve to hold a sleeping pad in place. It can either take two single-size sleeping pads or Klymit’s own Double V sleeping pad, which is what we used for this review. As the name implies, the Double V is an inflatable pad sized to pair with the company’s two-person sleeping bags. It’s made up of two rows of V-shaped air chambers in order to limit movement of air from one side to another. The idea is that even if one of you tosses and turns in your sleep, the other won’t be kept awake by it. 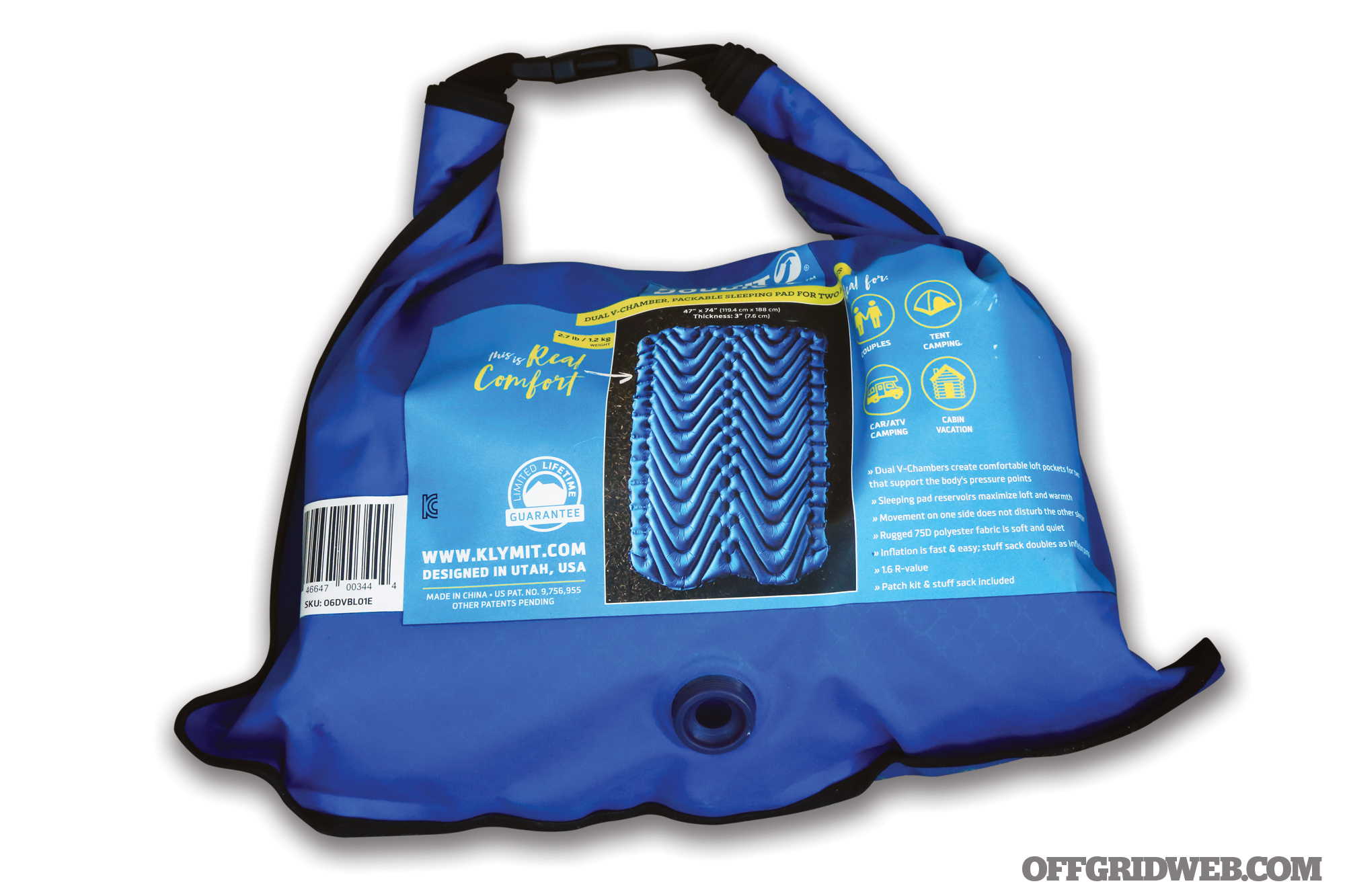 The Double V pad comes in a buckle-closure bag that includes a built-in pump nozzle in the bottom corner of the bag. Simply attach the nozzle to the valve in the pad and roll up the carry bag until you squeeze air into the pad itself. Then, unroll the bag and repeat until full. Klymit says you can fill the whole pad in 10 “pumps.” We found it faster to just inflate the old-fashioned way — blowing into it. Setup and breakdown took about 3 minutes, and the sleeve on the bottom of the KSB kept the pad securely in place.

We have had the chance to set up the Klymit KSB/Double V combos on a couple different trips with conditions ranging from pouring rain and ankle-deep mud in west Texas to subzero temperatures in the mountains of northern Arizona. Each time we used a Slumberjack Daybreak three-person tent for shelter.

The Klymit system held up well to the mud and moisture. Where we did run into an issue was on the late-winter trip to Prescott National Forest in Arizona. It was during the RECOIL/OFFGRID staff trip that consisted of a three-day endurance test of a number of loaner vehicles on a completely-off-road route from Phoenix to Prescott. (Refer to offgridweb.com/transportation/bug-out-challenge for a detailed recap of this trip.) While camping overnight at 5,000 feet elevation in early March, I wound up in the KSB double sleeping bag alone. I closed the draft guard and hood snap to most closely approximate a single sleeping bag. But, while those features help regulate the temperature for two sleepers, there’s no way to create a hard barrier to segment the sleeping bag for one person. This led to some significant issues keeping warm overnight. I wound up closing the hood and relying on my breathing to warm up the bag. Unfortunately, I fell asleep like this and woke up in an icy puddle of my own breath, which had been steadily condensing against the inside of the sleeping bag throughout the night. The KSB is rated as a 30-
degree bag. The temperature that night was definitely lower. 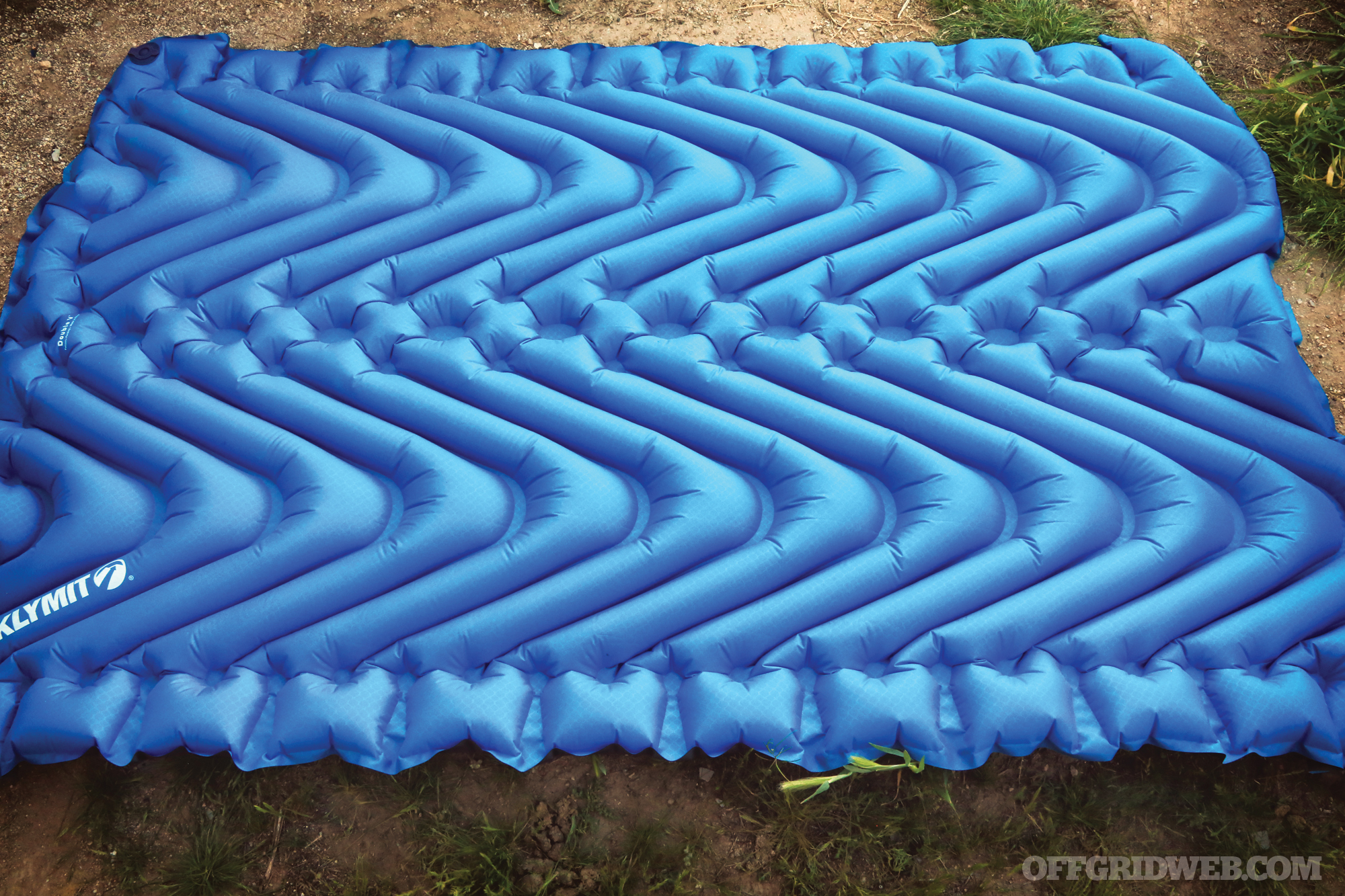 This isn’t a criticism of the KSB as much as a cautionary tale of choosing the right gear for the job. Packing a two-person bag when you know you’ll be sleeping alone might give you lots of room to stretch out (it does, which is glorious in fairer temperatures), but having all that additional airflow may become an issue based on the environmental conditions. Our only other issue with the KSB bag was with the stuff sack. Our three-day overland trek through northern Arizona had us strapping the KSB to the outside of our Roxor off-road vehicle. The rough ride left the KSB stuff sack pretty chewed up by the end of the journey, which required some significant patching up with duct tape as evidenced in the lead photo. In all cases, the Double V mat was incredibly comfortable, even with rocks and rough ground under the tent. 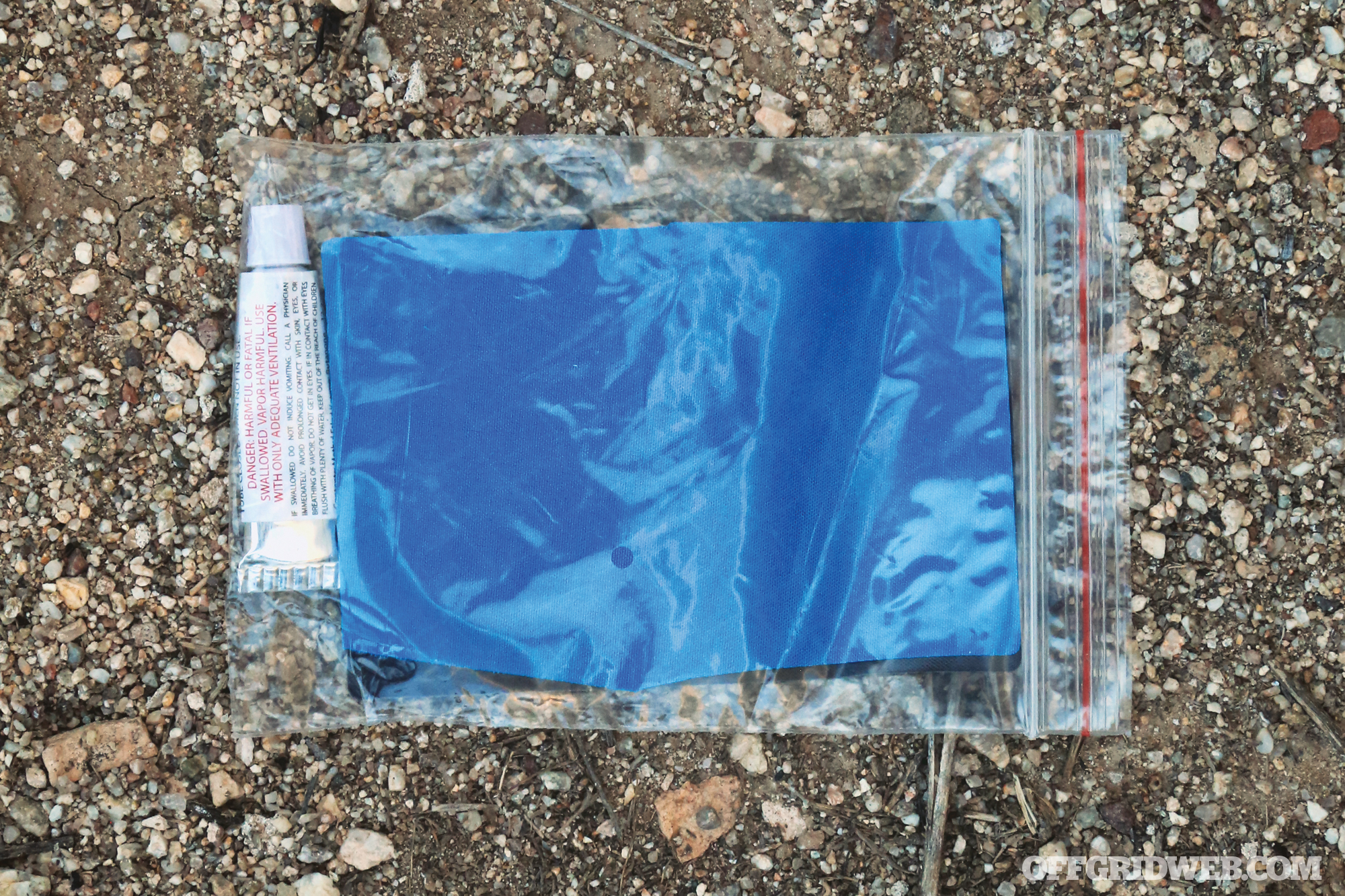 A patch kit is a helpful inclusion in case the inflatable pad someday springs a leak.

The sleeping bag itself weighs in at 5 pounds, with the pad adding another 2.5 pounds. The KSB has an MSRP of $380 — which, admittedly, caused a little sticker shock at first. But when you consider that you’re buying for two people, the price becomes somewhat more palatable and is at least on par with the cost of two single-serve sleeping bags, if not a little cheaper. Likewise, the $130 Double V pad breaks down to a pretty reasonable per-person cost. 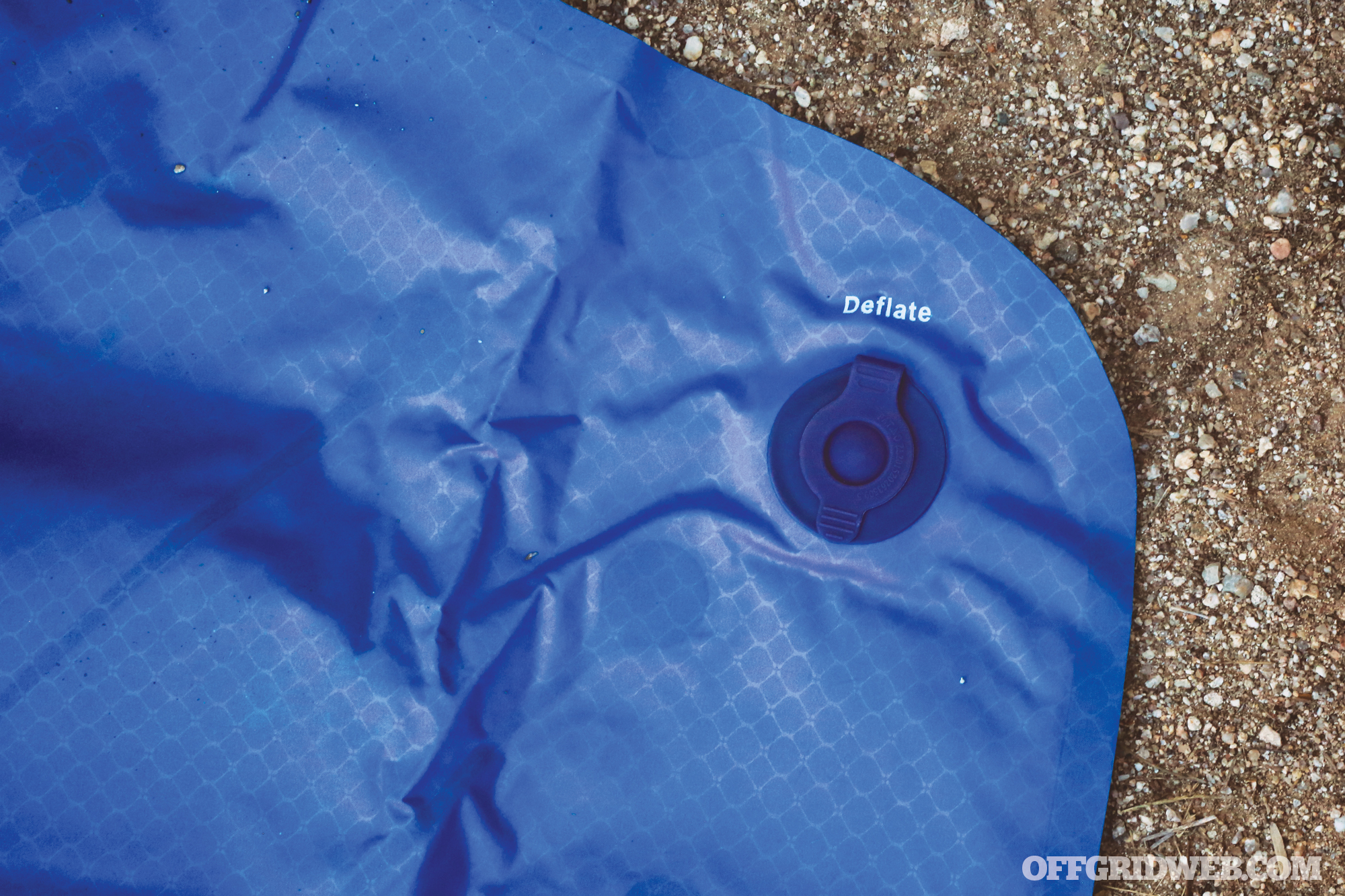 If you and your sweetheart love the outdoors and hate having separate bags, or cobbling a couples’ bag together out of quilts and air mattresses, then stop by Klymit’s website and take a hard look at both the KSB and Double V line.

Former CIA officer Jason Hanson has written an entire book on the use of the deadly stiletto. Not only that, but he even offers a combo package where you can get a stiletto knife along with the book. His is one of the best books I’ve seen on the use of this wickedly cool blade. You can get ...

Have you ever been in a dollar store and seen one of those cheap one-dollar first aid kits? There...

Beat ANY Bully Or Antifa Thug

News over the weekend was that more and more areas of big cities are being taken over by “...

Turn Your Hands Into Knives

This is great stuff that will turn you into a human weapon, with or without a knife in your hands, n...

The lying about the pandemic hasn’t stopped

…And if you’re going to rely on a face shield to protect you out there, especially during the pandem...

Limited Time – Get Your Shockwave Torch For Over 50% Off

This Weapon Will Be Illegal Soon…

This recent pandemic has proven, more than ever, that SMART citizens focus on homesteading - on prep...

This recent pandemic has proven, more than ever, that SMART citizens focus on homesteading - on prep...

“Old School” prepping is on the way back

Tactical Survival Guides from Skilled Survival is an instant library of "old school" survivalist an...

I almost go into a fight at Wal-Mart

The other day I was out trying to make a last, fast run for supplies at the local Wal-Mart… li...

What to do if you have no TP or bottled water

I know that a lot of people are dealing with shortages from the panic buying going on out there. To...

I tried to buy survival food and couldn’t. . .

With people making their own hand sanitizer because the stores are sold out, it's just a matter of t...